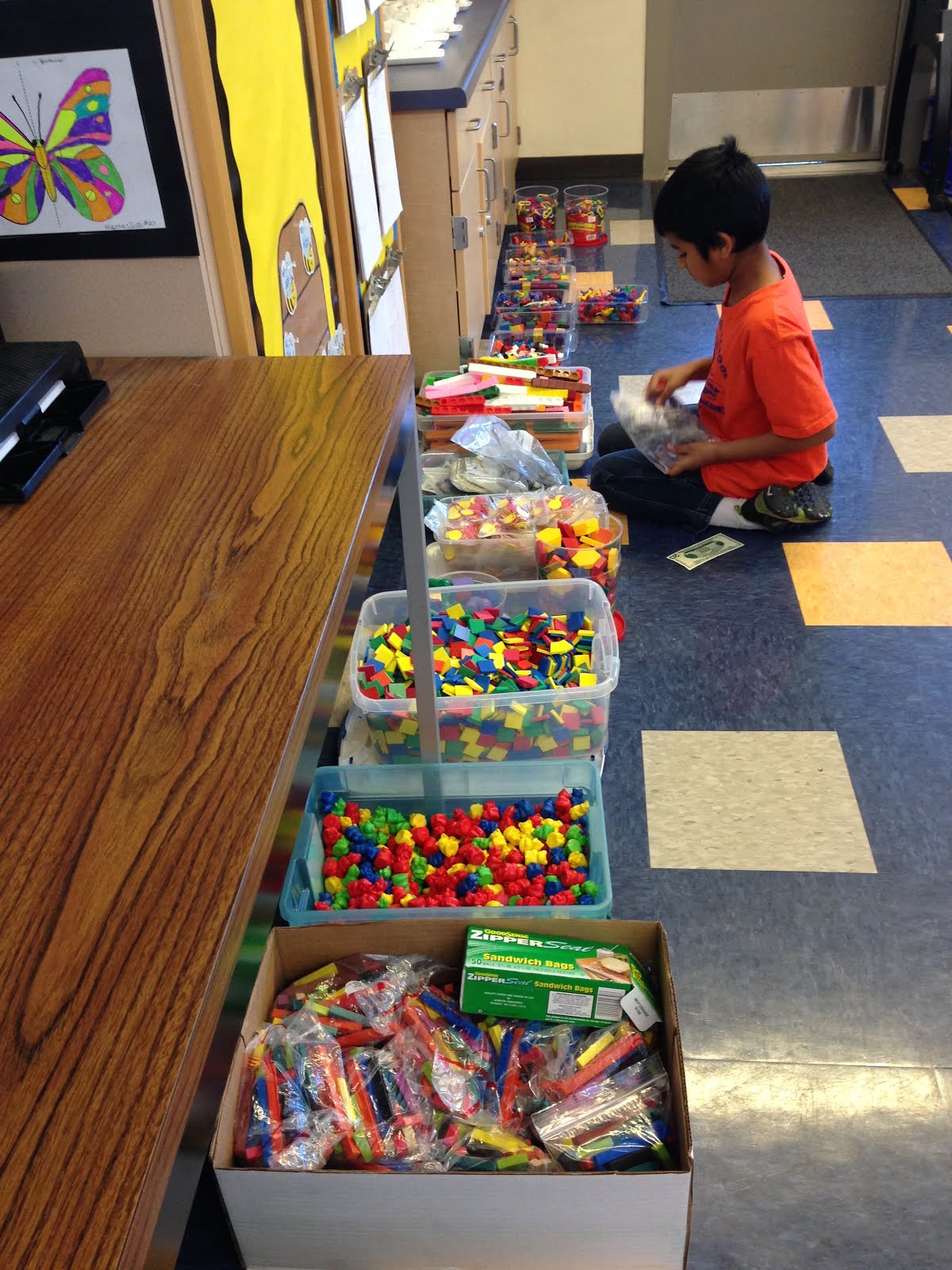 When you first walk into the classroom you see buckets of math manipulatives along the wall.  There are tiles, cubes, little bears, people, bugs, geoboards, etc.  The room is bright and full of energy!  What is about to happen is a math lesson where students have an opportunity to show what they have learned about fractions.
The students have been working on fractions, learning about regions, sets, and fractions on a number line. Mrs. Pomposo, a third grade teacher at Covington Elementary, wanted an activity where the students can demonstrate their knowledge in a fun unique way. She came across a video of a lesson that did just that. The lesson is called "Fraction Museum" and it allows students to be creative in the way they express their knowledge of fractions. It was very enjoyable to watch the students as they thought about what fractions to display in their museums.

Above is the video of the original lesson.
The students received the following instructions at the beginning of the class:

As a curator of a museum your job is to design five exhibits of fractions.  Be able to explain your factions collection and what you know about fractions.Try to incorporate a variety of exhibits, include an exhibit that shows fractions with a region, a set and a number line. Write a small tag to go along with each exhibit.

You can feel the excitement in the room as the students picked out all sorts of colorful objects to build their museum. Allowing the students the choice of how to display and explain their museum brought about so many creative and thought-provoking discussions.
One student had 7 bears lined up and had a fraction of 5/7. I looked at his bears and said there are 7 bears and your fraction is 5/7. Is it 5/7 because you have 5 blue bears out of the 7 bears? He said no, the 5 bears are something else. Hmmm, I said, then I noticed the way the bears were facing. He explained to me that he had 5 bears facing left and the other 2 were facing right; therefore, the faction represented the 5 out of the 7 bears were facing left. I thought to myself, how clever! The students had great fun creating and explaining their museums and were proud of what they created. One of the important parts of the activity was the ability of the students to explain their fractions to their peers.They were all calling me over to their exhibits wanting to show them off and explain them to me. Some students realized that their fractions where a little off when explaining, but quickly added or removed a piece to make it correct. They were able to self-correct through their explaining. 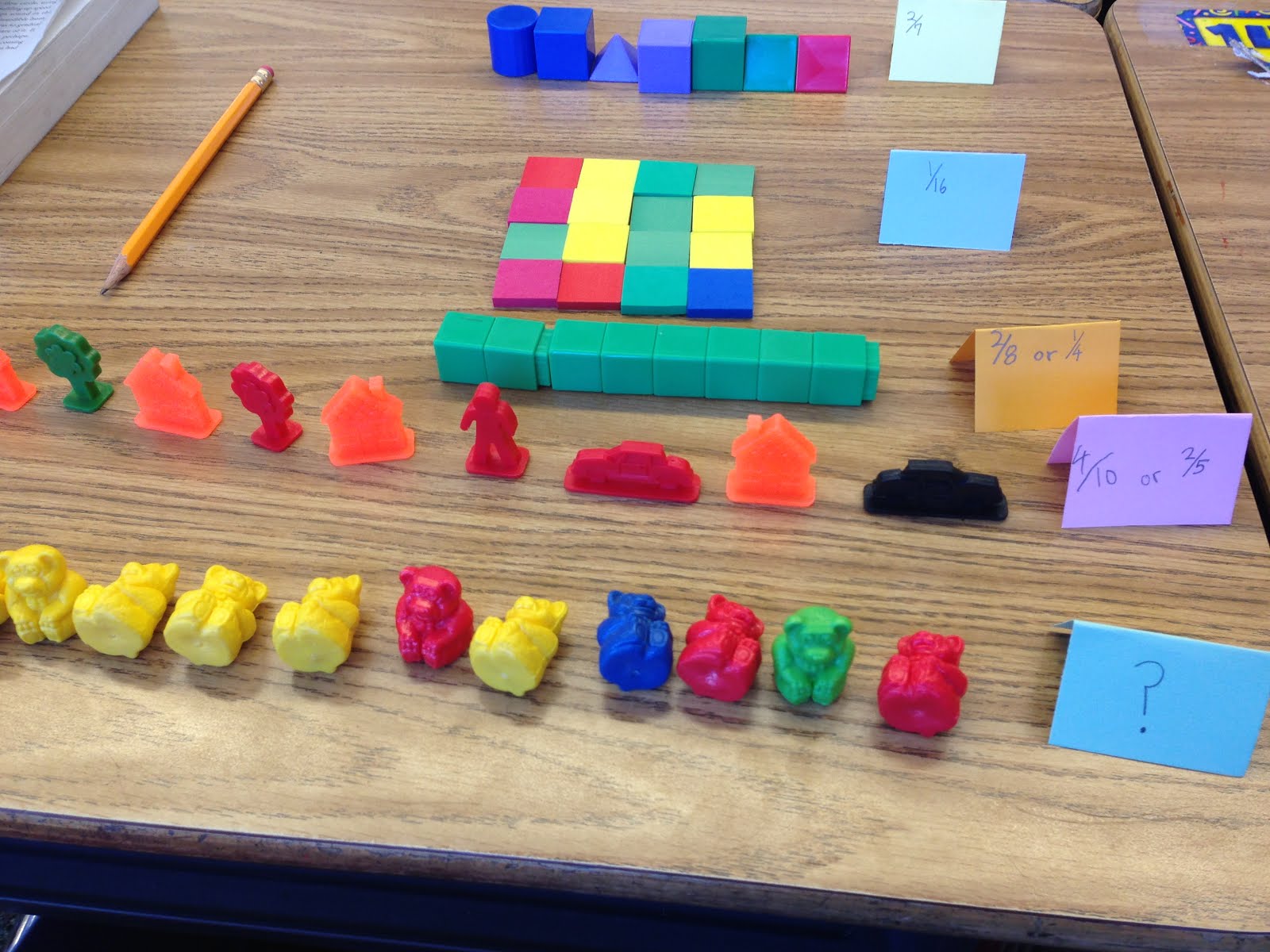 The exhibit they had the most fun with was the mystery fraction.  The students created a fraction with the objects, but labeled this one with a question mark.  It was up to the observer to figure out what fraction the exhibit displayed.  For most of the students this was their favorite part, in fact during our class discussion one student suggested that next time they do this activity that they would like to have all of the exhibits be mystery ones.
At the end of the activity there was a class discussion about their exhibits, what they found challenging, what they liked, how would they change the activity.  The student voice and choice in their learning is extremely important.  It not only helps the teacher in finding out what students know, but also how to connect with them.  One of the students made a comment about the activity saying “we had fun, but we were learning, but we were having fun.”  It is my hope that students feel this way for every lesson.

I recently came across a short blog post by Seth Godin around the topic of connecting the dots. He says, “Connecting dots, solving the problem that hasn't been solved before, seeing the pattern before it is made obvious, is more essential than ever before.”


Problem solving in today’s marketplace requires everyone to hone their dot connecting skills. With the vast amount of information available at the click of a search button, being able to prioritize and process data as well as see hidden patterns and connections within a system is invaluable. Design challenges rely on these dot connections to stay ahead of the curve and meet the oftentimes, undetermined needs of the user.
In school, we often assume that students are connecting the dots. We focus on handing out various dots; facts, timelines, grades, and we put them in neat stacks according to topic. Here are your math dots, here are your history dots, here are your science dots. Students walk out at the end of the day with a carefully labeled stack of isolated information ordered into binder sections. Do we give them enough opportunities to make the connections? Do we teach them the skills needed to see the patterns before they are made obvious?
Part of changing teachers’ mindsets is helping them understand that today’s students have access to many dots. No longer are teachers the primary providers of these dots, but we are responsible for helping students connect them. How might we make that the priority? How might we help them practice that skill?
As Seth mentions, “Their big bag of dots isn’t worth nearly as much as your handful of insight, is it?”

Contributed by Kami Thordarson, Innovative Strategies Coach
Posted by Anonymous at 9:38 AM No comments: