A Recipe for STEM

What do Scratch, MaKey MaKey and regions have in common?  A great recipe for a STEM project!  In LASD we have been working on integrated STEM, not only in our STEM labs, but in the classroom too.  Classroom teachers and the STEM teachers are working together to make the curriculum and STEM blend together.  The 5th grade team at Gardner Bullis did just that with the social studies curriculum.  Amy Shelley Bayani, the STEM teacher, brought the idea to the 5th grade teachers as a way to apply the learning of Scratch with the use of Makey Makey to create an informational game about regions.  Here is her story... 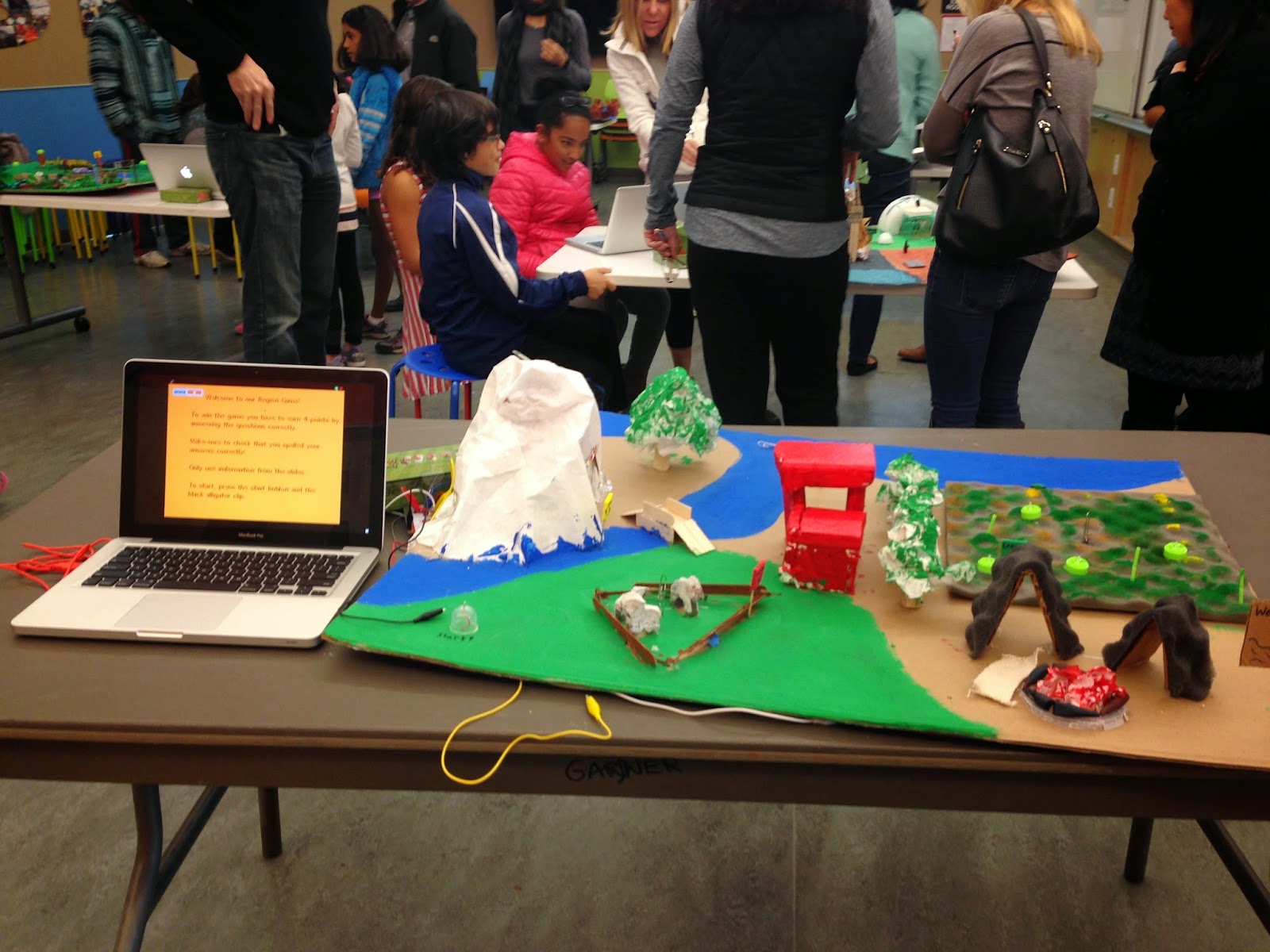 The 5th grade students were learning about regions of the United States in their Social Studies unit and in previous years they would build a 3D model of their region and then do a research report about it.  I was brainstorming ways to enhance and integrate what we were learning in computer science with the content in their class. After some brainstorming and consulting with others I designed a project that could enhance their old 3D model project while integrating Scratch and MaKey MaKey.  While students build their 3D model they each picked 4 places on their physical model of their region that the user could learn more about.  For example, the agriculture, the river as a water source, mountains, and local animals.   Each region would have a “touch point” or a paperclip that would be connected to an alligator clip that went to a MaKey MaKey.   Once the physical model was designed we programmed a Travel Game Show on Scratch.  The user, or player of the game, would be greeted by a travel guide that would take them to each region on Scratch once they touched the “touch point” on the physical model.  Once in that region the travel guide would provide information about the area and then ask a question. The player of the game could type in the answer.  If they were to get it correct they would earn a point. 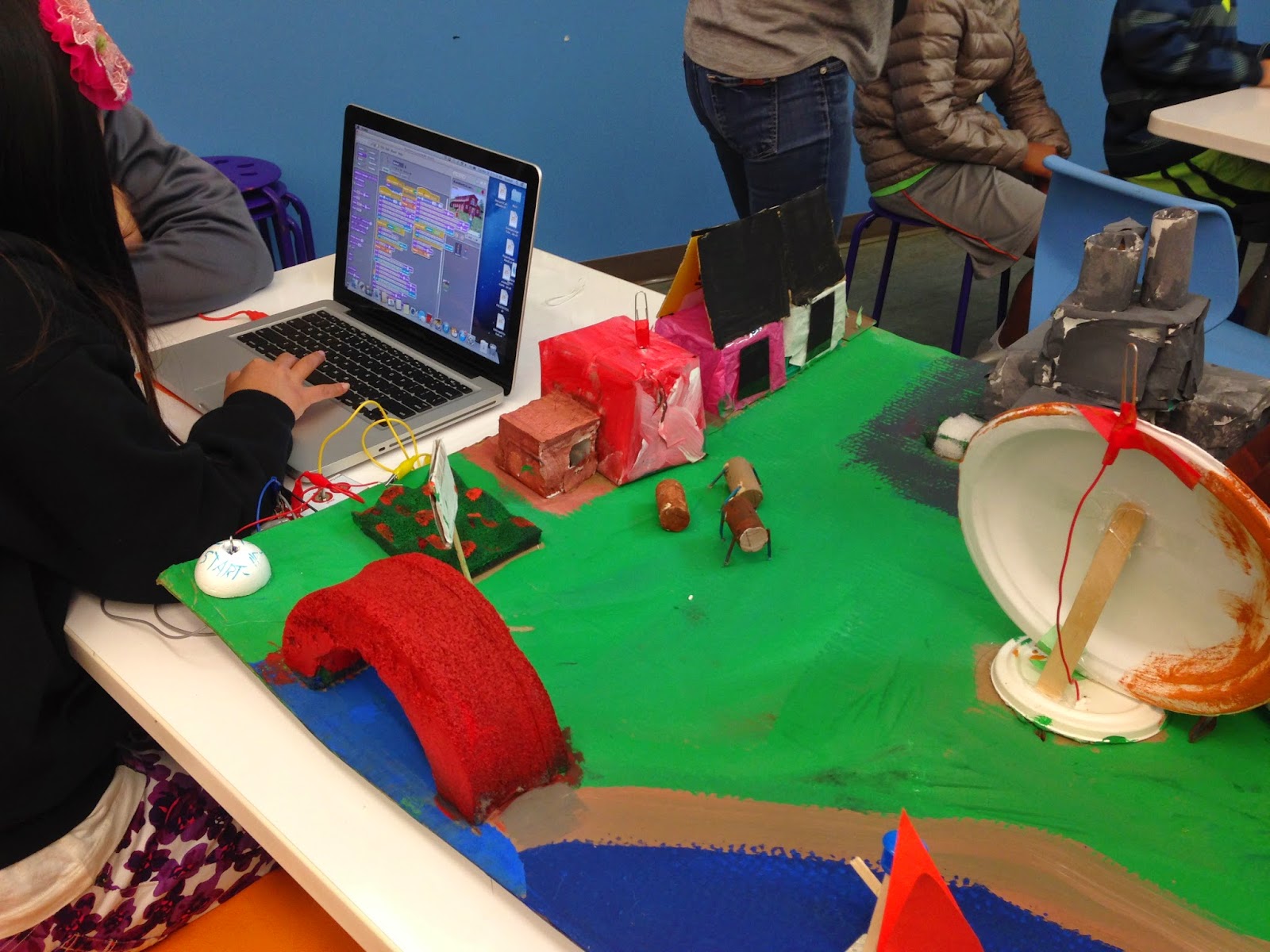 If they got it wrong the facts of that region would repeat and give them a second chance.   The goal was to get 4 questions correct in order to win the game.  The students were excited and engaged throughout the whole project.  They learned not only about the regions that they were studying, but also how to program a game and make it interactive.  This was such a huge success that as a STEM team we quickly realized that this model of using Scratch, MaKey MaKey, and engineering a physical 3D model can be used across many other content areas.


After sharing this idea with the STEM team many other thoughts arrived about how to apply it to other subjects.  Katie Farley at Covington shares her experience with this concept.

Inspired by Gardner’s project, our 5th graders will be integrating MaKey MaKey and Scratch to demonstrate their newly-acquired knowledge of state trivia. With the touch points on their 2-D and 3-D models of an assigned state relaying important facts and information, participants can have a museum-like experience. The platform also allows for a personalized learning experience for the viewers as the information presented on Scratch will be tailored to their level of understanding.  For example, students may be invited to “touch the teepee to learn more about the Native American tribes that originally lived in Arizona”.  When the teepee is touched on the 3-D model, pertinent information about the Navajo tribe will appear on the computer screen. At the end of this project, students, teachers, and parents will be invited to take a “museum walk” through the projects to learn more about each state in America.

The idea of mixing MaKey Makey and Scratch to enhance curriculum can be applied to just about anything.  It is an engaging way for students to learn about a content area as well as learning to code with a bonus treat of understanding circuits.  If this interests you try it out and share how you used it! We’d love to learn from the recipes you create.