The acronym STEM has been around for awhile now. STEM is the integration of science, technology, engineering and mathematics to solve a real-world problem. So what is STEAM?! It is the same thing, but with an addition of art! When we talk about tinkering and making which is part of STEM one cannot be within that wheelhouse without the idea of art. Since LASD has a STEM program and an Art Docent program we decided to bring the two worlds together for a day of collaboration.

It was a brisk Tuesday morning when a group of LASD teachers and Art Docents met to carpool over to the San Jose Art Museum. It wasn’t a teacher’s day off, but a special fieldtrip that was arranged in order for teachers to experience learning in a different way. One of our districts Learning Principles is “Connect Experiences” and one way to do that is to be out in the world and have shared event. A field trip is a great way for teachers to collaborate and share ideas.

We started in a room with nothing on the walls, nothing on the tables and just a sign-up sheet in front. I wouldn’t have imagined an art museum being so stark, but that didn’t give us any indication of what was to come… As we stepped outside the room there was a beautifully created sculpture hanging from the ceiling made of paper clips. We looked at one another and many of us repeated the same thing “I love that - how can we make that for our rooms?!” 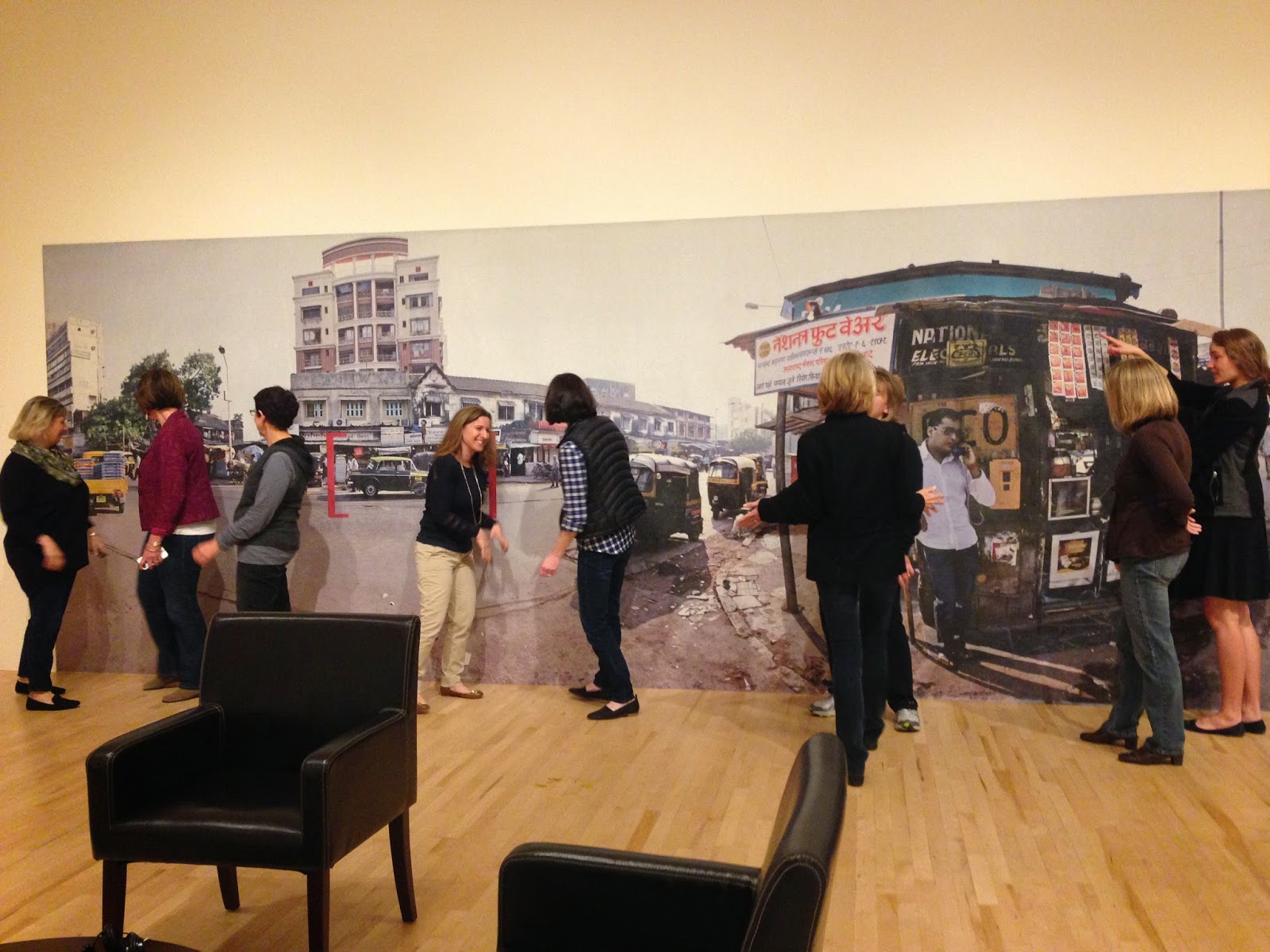 The first part of the day we spent in the museum learning about interpretation of photos or paintings. This was an exercise where everyone participated either with only one word or a story about what they thought was going on in the image. It was truly engaging for all. We even had a chance to be
part of a painting. The focus shifted to the classroom and how as educators we can bring these types of discussions into the classroom, how to honor everyone’s opinion and interpretation as well as having students explain their thoughts by using evidence from the image. Now it was time to apply what we learned about interpretation into our own work. When we entered back into the room with the sign-up sheet I noticed that there was a lot more in the room now. It had materials ready for the city creation project. 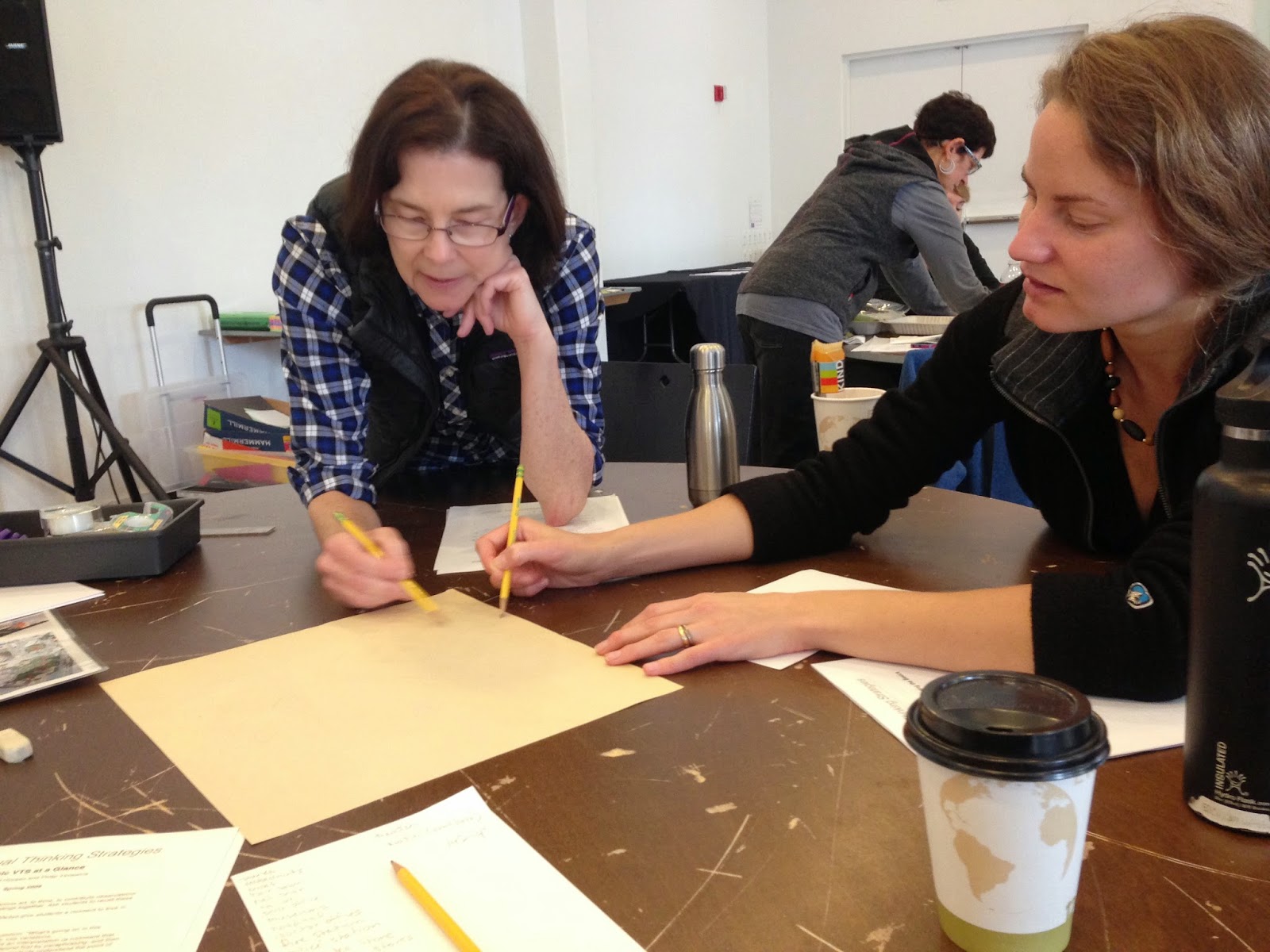 We worked in teams of 3 to 5 creating our city or town, but we didn’t jump right in as many of us wanted to do! We first had to brainstorm alone all of the things we could imagine or want in a city or town. Then we had to discuss those items as a whole group and decide what was going to be in our collective living space. The next step was a little difficult for my group. We had to sketch it out on paper. The paper we recieved was the same size as the plot of land that we will be using for our build. Each of us picked up a pencil, but no one wanted to make the first mark. I know personally, drawing is not my forte, so I was nervous that the image in my head was not going to translate on paper. Once 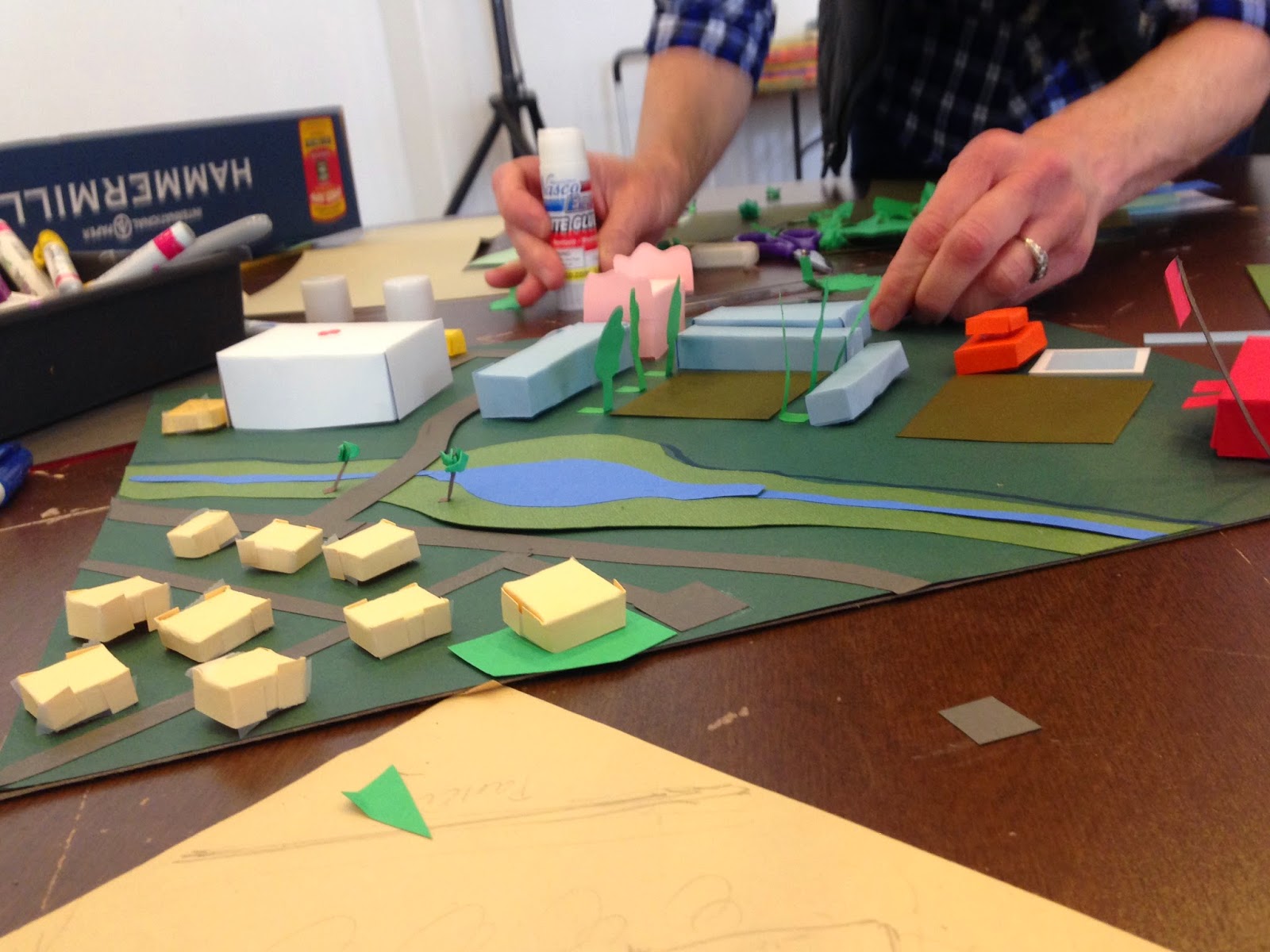 Erika, a team member, took the first step and made a mark we all jumped in and started to sketch. We finally had something to work with; a blueprint which became very handy as we brought our town to life. 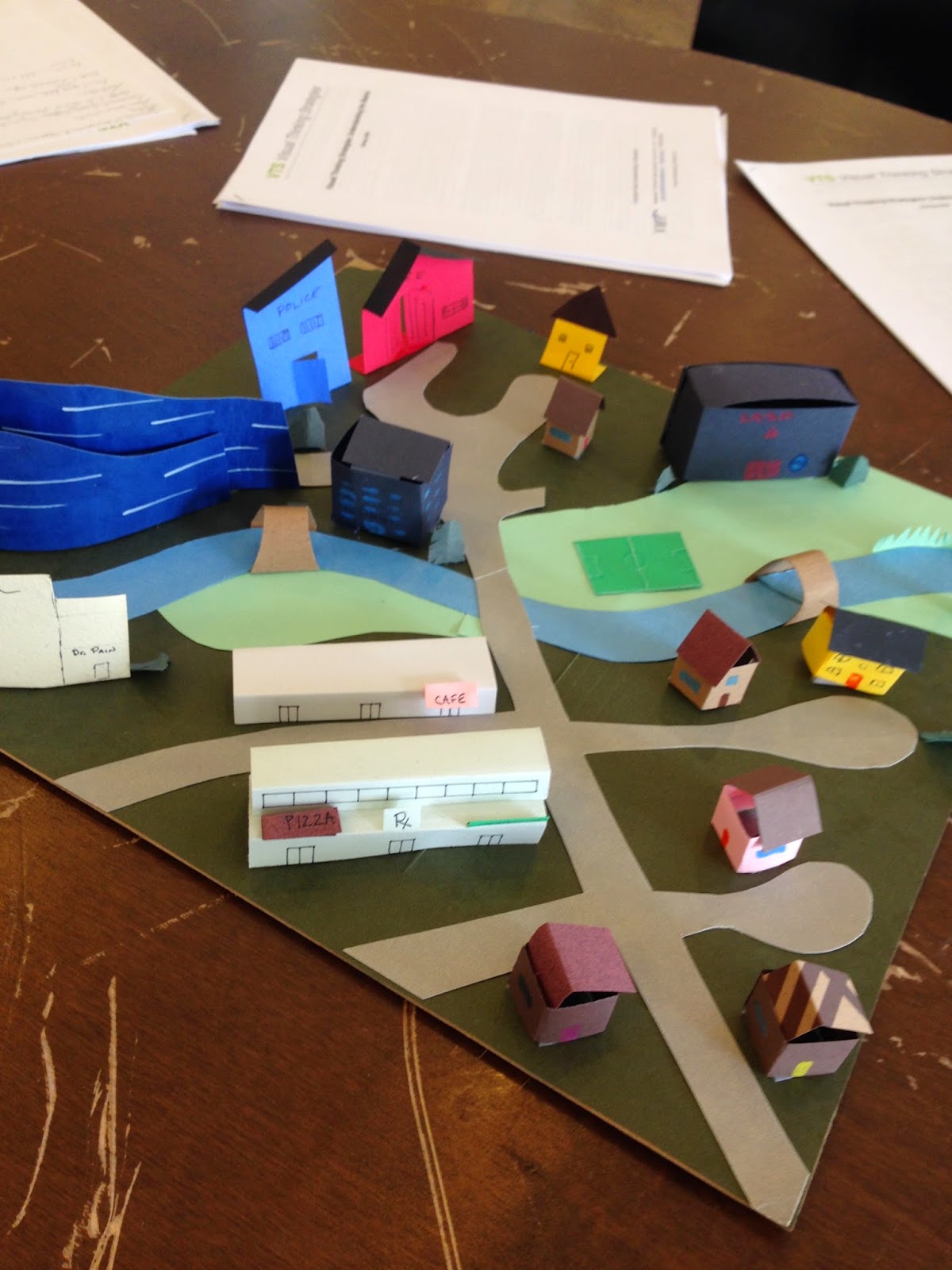 Now it was time to start assembling the town. I watched and listened as other groups began their builds. There was a definite buzz of excitement as the teachers and art docents began putting their towns together. We received a small lesson on some paper techniques to help us create buildings and other essential items for our town. As I looked around the room there were four towns/cities erected, all with some similarities and some differences. We had an opportunity to reveal our towns and explain the layout as well as the features. One of the similarities between all of the towns/cities was a water feature where people can sit, walk or bike around and some of the contrasting features were wineries, civic centers and churches. 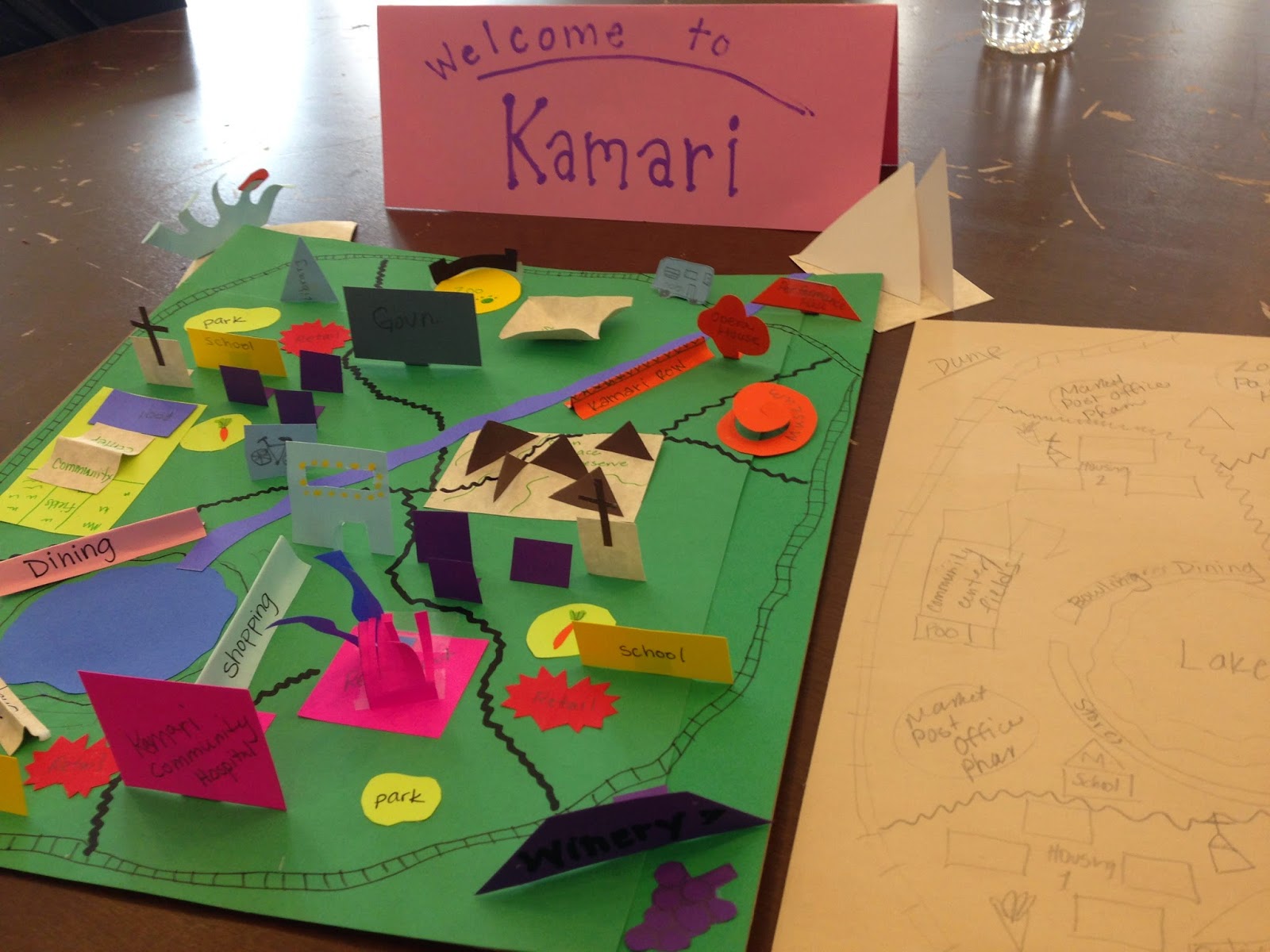 It turned out to be a great day full of creativity, collaboration and application of STEAM. Teachers walked away with ideas on how to implement more art into the classroom and ways to use active listening skills as part of the VTS (Visual Thinking Strategies), a technique the art museum uses for teaching about art. VTS includes asking questions and tips on how to respond to student's comments as well as emphasis on being open to student interpretation. When students are responding the instructor then uses paraphrasing as well as focusing on accepting students responses neutrally. I think this technique is useful not just for art, but in all subjects!